Torajima (虎島) is a one time character first seen in episode #66 of the TV Shorts; "Meeting". He makes his official debut in Season 2 of the Original Netflix series Aggretsuko in the episode "Unknown Future".

Torajima is a white tiger who seems very attractive to many women. He has green eyes, white fur, and a pink nose.

While he goes into a job mixer, he wears a dark blue tuxedo with a gray shirt and a dark green tie matching his eyes. When he shows his job as a physician in episode 66 of the TV shorts, he wears a white shirt and yellow tie while holding a stethoscope.

His only appearance in the shorts is when Retsuko, Washimi, and Gori go to a job mixer, where they all meet three men, including Torajima. Since he was really handsome, Retsuko couldn't handle it, but Washimi and Gori save face as to not be awkward around them.

In the Netflix series, Torajima meets Retsuko and Gori at a speed dating event. As Retsuko screams about the men she's met at the event, he introduces himself to her, seemingly snapping her out of her fury. After the event, Retsuko and Gori tell each other that Torajima is cute, and they both try to steal him. However, it all goes downhill when a woman tells them he is a fraud and was paid to be at the event. 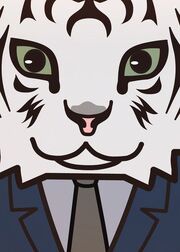