Tadano (只野) is a tech entrepreneur, the CEO of Freeride, Inc., and a supporting character introduced in Season 2 of the Netflix Original series Aggretsuko.

Tadano is introduced to Retsuko when he meets her at a driving course and over time the two develop a romantic relationship, but they later break up owing to their different perspectives on marriage.

Tadano has the appearance of a donkey. He is tall and slim with a rounded head and a longish rounded snout. Tadano has pale lilac fur with light lavender fur on the tips of his ears, curly periwinkle hair, long ears, and blue, tired-looking eyes with often large pupils and a skewed mouth. He has a long, thin tail that is the color of his fur and ends with a tuft the same color as his hair.

Tadano is frequently shown to sport a long-sleeved black hoodie with a white hood and collar or a long-sleeved light gray hoodie with a periwinkle hood and collar. He is only seen wearing a proper suit once in the show when he visits Chararyman Trading to try and show off his new A.I. program. He wears a full black suit with a white shirt and a blue tie. Tadano is also seen to be left-handed when autographing for Haida.

Tadano comes across in the earlier episodes as someone who never really grew up. Despite supposedly being Retsuko's age, Tadano comes across as very teenage-like from his overly relaxed and slouched posture, using much more casual slang (affectionately calling Retsuko by the nickname "Retsy"), calm voice, and tired yet amused looking eyes and expression. He even decides to give up trying to get his driver's license.

It is later revealed near the end of the seventh episode that he is not exactly who Retsuko, and we think he is. He turns out to be an up-and-coming Tech mogul that is well versed in technology and is much more intelligent than he first seemed. It is also revealed he seeks to push beyond modern capitalism and wishes to restructure society to allow people to pursue their own interests without working a menial job. He's simply an overall chill dude who doesn't have the intention of settling down, and even though he had unintentionally hurt Retsuko's feelings in his brief romance with her, he is still respectful of Retsuko's choice on breaking up with him.

ENI-O is an AI (artificial intelligence) created by Tadano, who sells it to a company. The AI is capable of analyzing all social media, TV, networks, even print, unlike normal AI that uses predetermined data. With that, ENI-O is able to create new value and demand a the company.

Tadano also uses ENI-O as personal assistant, helping him organize his schedule, and often asks ENI-O to analyze things for him. ENI-O is also his personal driver, however as the auto-driving cars are still not allowed, Tadano uses a dummy driver to make it look like a person is driving the car.

Tadano and Retsuko developed a romantic relationship stemming from their meeting while attending their driver's license classes. Nonetheless, he unintentionally caused the insecure Retsuko to become separated from her family, friends, and workplace. Eventually, they broke up at the end of the season as Tadano does not share Retsuko's desire to get married.

Haida initially had a dislike for Tadano when it was revealed that he and Retsuko were dating. However, his jealousy has apparently subsided after noticing how Tadano sadly left the karaoke bar, aware that the latter had broken up with Retsuko and asked if she was alright. They begin to be on friendly terms in season 3, regarding their respective relationships with Retsuko and have formed a bond over their mutual rejection by Retsuko.

Tadano helped Gori with coding her app, and the two seem to have bonded over working on it together. 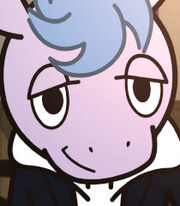 Tadano and Retsuko get coffee