Retsuko (烈子, lit. meaning fierce child) is a 25-year-old metal head office worker and the protagonist of the Aggretsuko series.

The series centers around Retsuko's day-to-day life as an accountant and her relationships with her coworkers. "Retsu" (烈) means "fury" or "rage."

Retsuko's appearance is based on the Red Panda. She has light orange fur on her face, black eyes, white ears, brown legs and arms, and a brown and light orange striped tail. Retsuko is seen in many outfits throughout the series, but her typical clothing consists of a peach sweater with jewels around the collar and a plaid skirt with black shoes. During the winter, Retsuko is usually seen wearing a navy blue pea coat, a black skirt, tights and boots, and a peach scarf. Her work apparel is the typical female office uniform: blue vest and skirt, white dress shirt, and brown dress shoes.

When she starts screaming death metal, Retsuko's appearance changes to corpse paint makeup, sharper teeth, pointed eyebrows, a devilish tongue, glowing blue eyes, and the kanji for rage (烈) appears on her forehead. She is usually seen crying or maniacally laughing while in rage mode.

In her daily life, Retsuko is a timid, softly-spoken, and polite young woman who works diligently, often being the only person to work overtime - usually because her bosses drop their work on her desk to leave on time. She is kind and slightly rigid, although, when drunk, she loses all mental filters and speaks her mind.

Internally, however, Retsuko has a vicious temper, which she curbs by renting a karaoke room and screaming her lungs out to death metal. She's a very talented singer in this respect, usually venting about her work, social, or romantic life. She's timid in showing others this side of her but gives in to Gori and Washimi when they beg her, and she later shows Resasuke and Tadano when she decides to tell them about her true feelings.

Retsuko briefly dated Resasuke during Season 1. Resasuke was absentminded and not very attentive but supportive of Retsuko, especially after discovering her true colors as a death metal singer. However, his response was underwhelming and clearly not appreciative of the meaning behind Retsuko's words, and while he was kind, she realized that she couldn't continue the relationship with him.

Retsuko briefly dated Tadano, a tech AI genius, during Season 2. They met in driving school where Retsuko was unaware of Tadano's career.

He, however, showed unintentionally controlling tendencies towards Retsuko and manipulated her insecurities which led her to be isolated from her friends, family, and workplace environment. They broke up after he expressed to Retsuko that he had no interest in settling down, marrying her, or having children. He also believed such arbitrary norms to be small-minded desires and sought a life partner without any legal bindings or obligations, which was against Retsuko's wish.

Thanks to her friends, who arrived in her hour of need to support her, Retsuko gained the courage to finally voice her true thoughts about her and Tadano's relationship, and the whole experience was ultimately a growing moment for her, realizing her old dream of quitting her job and living off someone else's financial winnings wouldn't bring her a sense of fulfillment or validate her existence.

One of Retsuko's coworkers, who cares for Retsuko romantically, something she was apparently unaware of until the end of episode 10. Retsuko rejected Haida's confession at the beginning of We Wish You A Metal Christmas, saying she understood how he felt but that she wasn't ready for a relationship. Haida became increasingly more nervous around her after this, but decided not to give up on his love for her.

After failing to ask her out to a Christmas party, Haida ended up running back to the office, hopeful that she would be there. After not finding her, a disappointed Haida decided to wander around town, running into Retsuko, Gori, and Washimi outside a ramen bar, leading Gori and Washimi to leave Retsuko in Haida's care for the remainder of Christmas.

Although mostly friends with Retsuko, Haida, along with Fenneko, becomes aware that she has been withholding her own private matters away from them. He appears to have become better friends with Retsuko after their private karaoke confrontation they shared in When You Count to Ten when they express their honest thoughts they used to conceal to each other.

Sometime later, Retsuko implies she likes him to an extent, as she decided to give him a chance after he finally asked her out. However, she soon noticed his lack of confidence, and after some awkward dates, told him they should remain friends for the time being. After she gave him a confidence boost by telling him that she likes him back and wants to know him better, they started going out again and became closer at and outside of work.

Upon discovering Haida had been generating fraudulent documents for Himuro, Retsuko slapped him back to his senses, telling him firmly that she was disappointed with him but he is still important to her, giving him the confidence to fight back against Himuro and put an end to a nearing fraud scandal.

They remain friends following Haida quitting his accounting job at the company.

Retsuko first saw Gori and Washimi at work doing their bad girl walk off the elevator. Gori took notice of Retsuko in the hallway but didn't say anything to her, just mentioned that Retsuko's fur was her lucky color for the day. Shortly after this, Retsuko started attending a yoga class that Gori and Washimi were coincidentally attending. Gori was initially too shy and Retsuko too awkward for them to talk, so Washimi took charge of introductions.

The trio started hanging out beyond yoga classes, going to bars and karaoke clubs. There, Retsuko opened up about her death metal singing, and they responded well to it, encouraging her to continue and even asked her to show them how to sing death metal. Gori and Washimi helped Retsuko come out of her shell a bit as a person, continually offering advice, support, and friendship.

An accountant alongside Retsuko, Fenneko is cunning and intuitive, able to deduce much about her coworkers' lives through social media, and expressed extreme suspicion of Retsuko when Tsunoda posted a selfie of them both. Nonetheless, Fenneko cares for and is protective over Retsuko (as shown when she attended the single's mixer as Retsuko's "bodyguard"). However, Retsuko tends to withhold private matters from Fenneko and Haida, which Fenneko becomes increasingly aware of.

Retsuko's easygoing, free-spirited friend from high school and drinking buddy. Puko invited Retsuko to join in on her international goods store, but Retsuko declined after finding that it would be based on internet sales and that her current, stable job was wiser. Despite this, Puko comments on how she admires Retsuko's responsibility, even going as far as to say that the reason she can be so carefree is because of hardworking people like Retsuko.

Retsuko was first introduced to Manaka when she became part of the OTMGirls. She was extremely impudent and demanding toward Retsuko, but she gradually grew appreciative of Retsuko, and they became friends.

Although initially aggravated by Tsunoda's personality and appearance, Retsuko eventually came to terms with the fact that Tsunoda acts the way she does towards their superiors to keep them tame in the workplace. She forms a close bond with Tsunoda first shown in We Wish You A Metal Christmas, where Tsunoda becomes a sort of social media mentor to Retsuko. She critiques Retsuko's Instagram shots to guide her into getting more 'likes' and becoming a better "Insta-girl."

Despite her criticisms, Retsuko decides to upload happy pictures of her meal with Gori and Washimi on Christmas rather than Instagram-worthy shots. Tsunoda smiles in response to them, glad to see that Retsuko chose happiness over popularity.

Retsuko's Mother looks exactly like her daugther, but their opinions on Retsuko's life are very different. The typical cynical mom, she judges everything about Retsuko, from her lack of a romantic relationship to her inability to keep a clean home. Forcing Retsuko into an arranged marriage does nothing but push Retsuko further away from a functional relationship with her.

Retsuko, her mom, and Puko mention her father a few times throughout the Netflix series, although he has yet to be formally introduced.

Retsuko looks and acts exactly like her grandma, sweet on the outside but has a ferocious attitude on the inside. An attitude that even scared Retsuko! 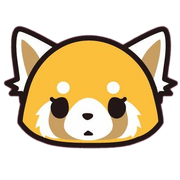 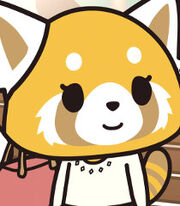 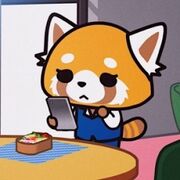 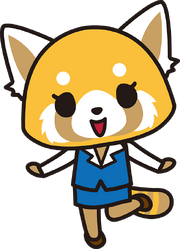