Puko (プコ) is a friend of Retsuko's from high school and a supporting character of the Netflix Original series Aggretsuko.

Puko's appearance is based on a Cougar. She is very tall and has light pink fur with duller markings on her forehead and around her mouth. She also has a white patch of fur on her mouth. Puko wears a green dress with lime green spots, a necklace consisting of blue-gray and pink beads, blue pants with rolled-up cuffs, purple socks, and brown shoes. She also wears a purple head bandana, tied in a fashion similar to those in the 50s.

Puko is a very carefree spirit who travels the world until she runs out of money then comes home to Japan to work until she has enough money to travel again. Her life theory is that the world needs responsible (and miserable) people like Retsuko so that she can be free to live her life of fun without consequence. When Puko decides she wants to start her own foreign goods store, she tries to rope Retsuko into it as an accountant but fails to mention to Retsuko that she can't afford to pay her a livable wage. In season 2, she does open a store, but only for a short period.

Both of them seem to be getting along very well; Retsuko and Puko both seem to have the same optimism regarding things that Puko tries to do, such as setting up and running a shop. 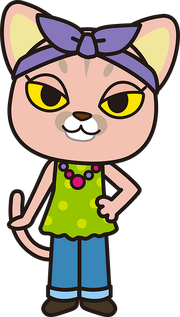