Ookami (大上) is an office worker and a supporting character in the TV Shorts and the Netflix Original series Aggretsuko.

Ookami's appearance is based on the maned wolf. He is tall and slender with orange fur, has amber-colored eyes, white cheeks, a white tail tip, a brown muzzle, and a "mohawk". His sclerae are golden.

Ookami is usually a very respectful accountant of his senior employees and regularly organizes the end-of-the-month office parties. He also seems to be pretty laid back and agreeable since he works less. Despite working in the accounting office, Ookami appears to be awful with his own personal finances.

In the TV Short, Favoritism, he finds Retsuko explaining her excuses to Tsubone, Retsuko then rages at her for being mean to her instead of Ookami. To make things worse, he compliments Tsubone on her new perfume scent.

He is also described by Fenneko as somebody who's shallow and has an annoying habit of repeating "seriously" and/or "that's crazy", as well as not the type who gives practical advice. However, sometimes he can actually spit out a few meaningful and straightforward words that hit the nail in the head.

Haida and Ookami are very good friends, although it is shown they don't interact much. In "The Duel", Ookami sounded a little disappointed when Haida refused to go out for drinks, and he was the only person that had his phone number.

On what he sees her in the TV shorts, Ookami finds Retsuko very attracting. He tries to confess his feelings for her, but instead, he asks to borrow money. After that incident, he now acts more of a minor friend to her.

Ookami trying to seduce a loan from Retsuko 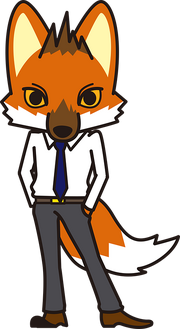