Manumaru (マヌマル) is a sales office worker at the same company as Retsuko and is a support character of the of the Netflix Original series Aggretsuko. Manumaru helps coordinate Resasuke and Retsuko's dates in Season 1.

Manumaru's appearance is based on a Pallas Cat. He is tall with a muscular build, yellow eyes, light fawn fur, a white muzzle, round brown stripes on his forehead, and white stripes on his cheeks.

Manumaru is only seen wearing a white dress shirt with no tie, gray pants, a brown belt, and black shoes.

Manumaru is flirtatious, tough, and very social. He can occasionally boast about his accomplishments and can be controlling of a situation, but ultimately does it to help his friends in his own way.

As the mixer progresses, he finds himself to Retsuko, describing her as looking like a Sanrio character, before becoming infatuated with Fenneko, saying she's a "total spitfire" and convincing her that office mixers are awesome through his compliment, ultimately disarming her typical demeanour.

Following the events of the office mixer, he pushes Resasuke to go on a date with Retsuko. Even though Resasuke challenges him on why, he takes the time to explain why dating Retsuko would be in Resasuke's best interests, even to the point of outright saying he's worried Resasuke will be single forever.

During Resasuke's date with Retsuko, he's called by Resasuke and takes the time to affirm him that the date is going well.

As they work together in the Sales Department, Manumaru is well aware of Resasuke's characteristics, even forcing Resasuke to date Retsuko as a means of getting him out of his quiet shell, even helping guide him on dates through phone calls

Rinta and Manumaru are co-workers in the Sales Department at Carrier Man Trading Co. Rinta came to a mixer at Manumaru's request. 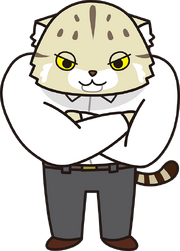