Kabae (カバ恵) is an office worker and character in the Netflix Original series Aggretsuko.

Kabae is renowned for her ability to quickly spread rumors in the office and even gloats that she is so proficient at it.

Kabae’s appearance is based on a Hippopotamus. She is a large woman with pink skin, bright pink cheeks, small ears, and two prominent square front teeth. The word “kaba“ is Japanese for “hippo”.

Like Retsuko’s, her work attire consists of a blue vest and skirt, a white dress shirt, and brown shoes. Outside of work, she is seen wearing a spotted orange blouse, blue pants, and brown shoes. During winter, she wears a purple jacket, white gloves, and a white hat.

Kabae has a very bubbly personality, loves to talk about her family, and is quick to spread rumors. Despite her tendency to leave a path of destruction with her rumor spreading, she is a genuinely good person who even went as far as going to Retsuko's house to care for her while she had a cold. Furthermore, behind that joking attitude, Kabae is a very effecient worker and hire trainer, respected among her peers. She is also seen to care for her coworkers as when she was asked to resign, she was worried that if she declines, they will ask some of her coworkers to resign.

Kabae met her husband when she tried to "zip her lip" and had to go to the hospital. The doctor, who was her soon-to-be husband, listened to her 3 weeks' worth of chatter, and soon after, they got married. He appears to be a very fatherly man of few words, who clearly loves his family. He rolled on the ground pretending to be hurt after their youngest son bumps his head, and she "transfers" the pain to him, going along with the antics to cheer their son up.

Kabae is very doting over her children (three sons), often talking about them and their accomplishments, and trying to show everyone in the office pictures of them. Her sons seem to be good detectives as it is shown in We Wish You A Metal Christmas that they were able to figure out where their Christmas presents were hidden solely based on the mud they found on Kabae's boots. In episode 5 of Season 2, her children and husband are finally seen when they stop by Retsuko's yakisoba stand during Family Appreciation Day. The children are very energetic, running around while Kabae urges them not to bump their heads. When she urges Anai to use his cooking skills, the entire family is impressed with the delicious yakisoba. The youngest son bumps his head later and cries at first, but Kabae calms him down with a song and makes him laugh.

He is Kabae's nephew. Little is known about him.

Kabae and Anai became friends after he sent a threatening e-mail to the entire accounting department, and she unexpectedly was the only one from the department being able to talk with him softly and sharing some lunch with him, ending to Anai to open up to his duties and then, to realize his talent for cooking should be shared with his partners, allowing him to get some extra money by selling food and making friends in the process.

Kabae and Retsuko are coworkers and friends. Kabae often spends time near Retsuko's desk talking about rumors, however she doesn't listen to Retsuko, when she tries to gives reason as to why the rumor is incorrect. When her son was sick and Kabae had to take the day off, Retsuko volunteered to do her work in order for Kabae to be able to skip work and take care of Kabasuke. Similarly, Kabae is always ready to help out Retsuko, and helped her with her secret mission to gather evidence for the window dressing. 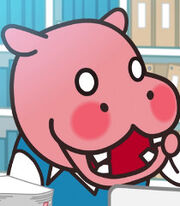 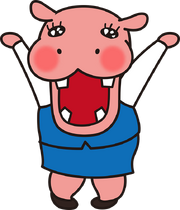