Inui (犬井) is a supporting character appearing in Season 3 of the Netflix Original series Aggretsuko, in which she was a temporary employee in Administration at Carrier Man Trading Co., Ltd..

Inui’s appearance is based on a Borzoi. She is tall and slim with mostly white fur, but she does have some cream fur around her long, wavy ears. Around the office, she wears a regular uniform with a navy blue vest and skirt, a white dress shirt, and brown shoes.

Outside of work, she wears a faded pink long sleeve top and a coral button-up skirt reaching down to her knees. Over it, she wears a brown coat that goes down to her ankles and black boots, grey mittens, and a scarf.

Inui is mild-mannered and demure, normally keeping to herself. She can be upfront and forward, particularly when it comes to her relationship with Haida. But ultimately, she is respectful and learns to accept his choice.

Inui met Haida at Carrier Man Trading as she was looking for a member of accounting to assist her in an administration problem, and bumped into Haida again outside of work at a record store.

They quickly bonded over their love of music, even spending time together at Haida's favorite punk bar until she eventually figured out that Haida doesn't fully reciprocate her feelings towards him, and knew that he had greater feelings for Retsuko. Although heartbroken, she told him to be decisive and respected his choice.

Inui met Haida again at the same record store where they first met sometime later, and talked about their past relationship as well as her dismissal from the company, of which Haida had no idea of nor that she was only a temporary worker. Noticing that Haida wasn't aware, she becomes annoyed at him as she was sure that she told him before, and was disappointed in thinking that he paid attention to her when they were dating.

She then told him to not do the same to his current girlfriend, and commented on his new coat; preferring it over his old one. 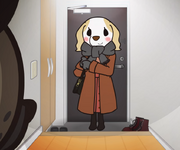