Haida (ハイ田) is an office worker and a major supporting character of the Netflix Original series Aggretsuko.

Haida worked alongside Retsuko in the accounting office of Carrier Man Trading Co., Ltd. and has a long-standing crush on her. After the events of Season 4, he quit his job at the company.

Haida's appearance is based on a spotted hyena, and his name is a play on the Japanese pronunciation of 'Hyena'. Haida has grayish-brown fur, a black nose and ears, and a dark gray muzzle with freckle-like spots on his cheeks. His eyes are hazel, and he has gray hands, tail, fur tufts in his ears, and a pronounced underbite.

Haida wears a white dress shirt, red tie, black dress pants, and brown dress shoes at work. As director, he wears a black coat over his shirt at work and a long navy blue coat over it when out of work. His casual wear consists of a red and black striped t-shirt, black leather jacket, jeans, and boots. In winter, he wears an olive green coat with a white fur hood.

It is hard to say what Haida's real personality is like, as most of his time is either spent fawning over Retsuko or drunk, but these situations show that he is somewhat neurotic, often visibly anxious, and can be prone to bursts of anger. Haida tries hard to impress Retsuko with his initiative to fix her things and compliments her as best as he can, but cannot get himself to admit his feelings for her and doesn't take her rejection very well at first. He has a lot of trust for Fenneko to keep Retsuko safe at the mixer, and though he gets extremely jealous of Resasuke, he is still content that Retsuko is happy with him. This shows that he is kind and considerate, even when not getting what he wants.

At times, Haida can get very passive and indecisive, such as when he juggles between his feelings for Retsuko and Inui, unable to choose between the two. He can be pretty much of a pushover, only following people's words rather than listening to his own choices.

His lack of confidence has been a huge obstacle in his life, such as hindering him from advancing his relationship with Retsuko further, and it also makes him susceptible to manipulation from empowered individuals like Himuro. But gradually, he learns how to stand up and be at least a bit more assertive after Retsuko slapped some senses back to him.

Haida developed a huge crush on Retsuko sometime after they started working at the trading firm together, six months after they started working together when he caught Retsuko stealing water after work hours. Aforementioned by Fenneko, he had a crush on her for approximately five years to which he primarily kept it a secret (except from Fenneko). He explained that his reasons being, his first impressions and interpretation of Retsuko described her as vanilla until he saw her after work hours and decided to tail her and catch her in the act of putting her water bottle near the water machine. To his delight he found it fascinating and with that explanation - that's how the long term crush began, as well as him thinking she was cute. Since then, he tried working up the courage to confess to her. After Retsuko started dating Resasuke, Haida blamed no one but himself for waiting too long; he took their relationship very hard and went out drinking alone, catching pneumonia after dejectedly laying outside in the rain. Retsuko visited him in the hospital, informing him of her break up with Resasuke, leading Haida to finally confess his feelings. Retsuko politely rejected him, saying she knew how he felt and that she did like him, but that she simply wasn't ready for a relationship yet.

Haida later developed a complex after the rejection and couldn't talk to Retsuko, having nightmares regarding the rejection. After Fenneko told Haida that he should move on, Haida proclaimed he wasn't ready to and wanted to try again, but failed to ask her out to a Christmas party due to his nerves. After seeing Retsuko's lonely Instagram post while at a Christmas party, Haida ran back to the office thinking she might still be there working overtime, disappointed to not see her there. While walking back, he ran into Retsuko, Gori, and Washimi leaving a ramen bar. Gori and Washimi walked off, leaving Retsuko in the care of Haida, and the two decided to spend the rest of Christmas walking home together.

Months later, when news broke of Retsuko's relationship with Tadano, he became extremely jealous and sad, stating he was going to punch Tadano despite previously being a huge fan of his, showing that he wasn't letting it go, but his jealousy seems to have lessened after noticing that Tadano was upset upon leaving the karaoke bar, aware that Retsuko had privately ended her relationship with Tadano.

Haida, along with Fenneko, were aware of Retsuko hiding personal matters from him, and had since resigned to their current relationship as mere work colleagues despite his lingering sentiment for her. His feelings towards Retsuko became affirmed after she admits second-handed to having him as a friend instead of a work buddy soon after teaching her guitar lessons. He tries to spend some time with Inui to get his mind off Retsuko, but eventually he realizes that he cannot forget about her as Inui soon figures out he still has lingering feelings for Retsuko. He later saves Retsuko from an aggressive stalker and finally realizes he cares about her after Inui tells him to be honest with himself.

Sometime after Retsuko shuts herself in her parents’ house, Haida decides to step in by dragging her out and bringing her to the karaoke bar. He sings aggressively to Retsuko to motivate the latter to admit and express herself and once again confesses to her. Although rejected and initially staggered by her death metal, Haida accepts her and reaffirms his support for Retsuko, which shows his willingness to know her for who she is, unlike her other boyfriends. They had since become better friends afterward, being more honest with each other.

Haida decided to muster up the courage to ask her out, but out of submission and anxiety brought on by his lack of confidence, he started creating reasons for getting out of going on dates with her. Retsuko soon believed that they weren't ready to enter a relationship, and decided that they should stay as friends for the time being. After she gave him a confidence boost by telling him she likes him back and wants to know him better, they started going out again and became closer at and outside of work.

Haida became more immersed in his work after being acknowledged by Himuro for the sake of validation and loyalty to the company, eventually leading to his involvement in fraud of the company's quartly profits. After Retsuko realized his actions, she slapped some senses back into him, telling him frankly that even though she was disappointed with his mistake, she still cares and values him.

Thanks to Retsuko, Haida eventually stood up against Himuro and quit his accounting job, with him and Retsuko remaining as close friends outside of work.

Haida initially met Inui, and after finding out that she shares an interest in music with him, he tries going on dates with her, hoping that she can help him get over his feelings for Retsuko. However, Inui later perceived that he isn’t very into her and advised him to make his own choice.

In Season 4, Haida and Inui bump into each other at the same record store where they first met each other. They catch up with each other over drinks at the punk bar, with Haida's lack of interest in Inui becoming clear when it's brought up her role at the company was temporary and that Haida didn't remember.

Fenneko and Haida are good friends, co-workers, and drinking buddies. Until We Wish You A Metal Christmas, Fenneko was the only person who knew of Haida's secret crush on Retsuko. She would help him out as much as she could, keeping guys away from Retsuko at mixers and social media stalking Retsuko to calm Haida when he thought she had a boyfriend. Fenneko later stopped encouraging Haida after Retsuko rejected him and she pleaded with him to move on with his life, but then continued after Retsuko started showing signs of liking him back. Sometimes Fenneko being a cynical troll can get on his nerves.

Haida and Anai originally got off on a good start until he saw how unstable Anai was and began to frighten his co-workers. He won them over with his cooking, however. Haida and Anai are often seen talking from time to time, implying that they may have become good friends.

Haida and Ookami are good friends.

Haida was previously a fan of the tech entrepreneur Tadano. However, his admiration quickly turned to dislike when it was revealed that Tadano and Retsuko were dating. He ultimately did not go through with it though and instead shyly asking for his autograph. His jealousy apparently has lessened after noticing how Tadano sadly left the karaoke bar, aware that the latter had broken up with Retsuko. They begin to be on friendly terms in season 3, regarding their respective relationships with Retsuko.

Sometimes, Haida expresses jealously of Tadano; believing that he is better than him and was on much more open terms with Retsuko, leading to an arm wrestling contest with Tadano.

Haida's work gets recognized by Himuro and Haida would then start looking more of his approval, and stay late work additionally during the after work hours. They develop a friendship-like relationship as they become gym buddies. Due to his lack of confidence and need for recognition, Haida would get easily manipulated by Himuro to generate fraudulent profit documents, convincing himself he is doing it became he wants and for Retsuko. Eventually he overcomes his need of recognition and stands up against Himuro, wishing to prevent him from putting someone in the same situation as him. 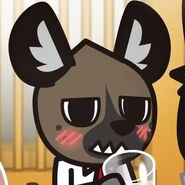 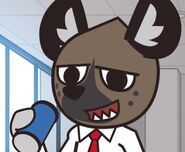 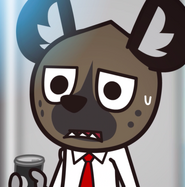