Gori (ゴリ) is the Marketing Director and a support character of the Netflix Original series Aggretsuko.

Gori is always seen alongside Washimi at work and with both Washimi and Retsuko outside of work.

Gori's appearance is based on a Western Lowland Gorilla. She has a large build, gray fur across her body, and dark gray skin on her face and ears.

Gori usually wears a hot pink dress with matching shoes and a yellow beaded necklace and earrings, but also wears a hot pink t-shirt and shoes, teal shorts, and the same yellow earrings while at yoga class. She has been seen in a purple dress with a matching belt in some promotional artwork.

Gori first comes off as very ladylike and confident, but was very shy when it came to making friends with Retsuko having to tap out with Washimi to finish introducing themselves. Once she and Retsuko became friends, Gori showed a much more excitable and emotional side to her personality. Gori tries really hard to make a good impression on men and to make relationships work, but her job often gets in the way leading to some serious heartbreak.

It's unclear when Gori and Washimi met, but they are very close throughout the series. They appear to work closely together at work and hang out frequently outside of work, going out for dinner and drinks, doing yoga, and going to karaoke together (later joined by Retsuko). In the episode "Growing Affection", we see Washimi and Gori get in a fight over their conflicting ideals of marriage and have a small rap battle afterwards on Retsuko and their vacation.

Retsuko was a little unsure of Gori at first, but they quickly opened up to each other and became close friends. Gori was the first at yoga class to try to befriend Retsuko, later saved by Washimi when neither her or Retsuko could figure out what to say. In the episode "Unknown Future", Gori meets Retsuko at a singles party where both didn’t think the other would be there and we get to experience some of a character arc with them after the party.

Generally Gori and Retsuko are close friends, but sometimes she can get a bit too overzealous, which can make Retsuko rather anxious.

Tadano helped Gori with her app's code, and the two seem to have bonded over working on it together. 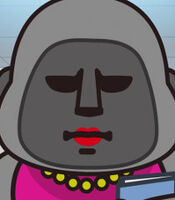 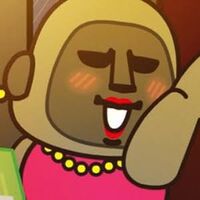